CoCo Plum Living Power couples may be a rare commodity in most South Florida neighborhoods, but in Islands of Cocoplum, they are an everyday sighting. The Varases, in particular, represent the new generation of successful, flourishing residents who contribute a positive and vibrant spirit to the community. The Varases don’t just share an amazing story, but with the addition of their beautiful baby boy Angelo to the family, they also happen to be one of the youngest parents in Islands of Cocoplum. Manny Varas and Dr. Brianna Varas were both raised in the South Florida community. Brianna graduated from Our Lady of Lourdes Academy and went on to attend New York University before returning to the University of Miami to study medicine. Manny grew up in Islands of Cocoplum and attended Coral Gables Senior High School before graduating Magna Cum Laude with an MBA at Florida International University and is an Alumni of Harvard University Graduate School of Design. Always working while attending school, Manny quickly became one of the most successful Hispanic entrepreneurs in the country. Shortly after graduating, Manny purchased his own home in Islands of Cocoplum located in Caoba Ct. When the young couple met in 2009 at green street café, they went on their first date, and the rest is history. Manny Varas and Brianna Varas married on November 8, 2014, and had their wedding ceremony at the beautiful Epiphany Catholic Church, with a reception at Vizcaya Museum & Gardens. On their honeymoon they visited Maldives and Dubai, where the couple dined at the world’s first underwater wine cellar & restaurant, Sea in Kihavah. “The beaches of Maldives were amazing, and Dubai is still one of our favorite places to visit! We went during the Formula 1 races so the timing was spectacular. We also took a Safari of the desert which was another great experience,” explains Manny. At the time, Manny was able to reach out to some of his classmates that he knew from his studies at Harvard University’s Architecture and Development Graduate Program that were from Dubai, so the couple enjoyed some local hospitality as well. Just a few months later, Brianna received the life changing news that she was expecting. And in December of 2015, Manny and Brianna became one of Cocoplum’s youngest couples, with the birth of their precious baby boy Angelo. “It’s such an amazing experience to have your own child. Even though I’m a pediatrician, nothing can ever really prepare you for being a parent,” says Brianna. Brianna still works full-time as a pediatrician and Manny leads the luxury construction & development firm MV Group USA. The couple chose not to have a caretaker for little Angelo as they felt it was important for family to take care of the baby, so Angelo’s grandparents do much of the baby sitting. Manny’s mother Mirtha lives on Costanera Rd. and never passes up an opportunity to spend time with her new grandson. Brianna says her parents are also completely in love with little Angelo, “It’s so great to see how the grandparents love Angelo! My dad is the Medical Director of Transplant Pathology at Jackson and he’s always been a workaholic, but recently he even took the day off just to come visit Angelo. My mom who is a prominent attorney and partner at QPWB takes a day off every week to see her grandson. They send us pictures of themselves holding the baby and I can tell they’re really enjoying the experience of grand parenting.”

Baby Angelo’s arrival has made this the third generation of the Varas family to live in Islands of Cocoplum. Manny and his brother moved to Islands of Cocoplum as teenagers and lived in Costanera Rd. with parents Manny Sr. and Mirtha Varas. Coming from Cuba, they share a similar story with many longtime Cocoplum residents. The Varases combined a strong work-ethic with the Cuban entrepreneurial spirit, as Manny Sr. and Mirtha strived to make it in America as young immigrants. Manny Sr. was a lunch truck driver for the factory that Mirtha worked at. They soon married and Manny Sr. sold his truck and entered into the insurance business. Manny Sr. steadily grew from a commercial insurance office to running several major insurance brokerages around the country. When the health insurance industry changed in the early 1990s, he sold his insurance companies and entered into the residential real estate market. The Varas family came to Cocoplum in 1992. At the time, Tahiti Beach was empty and only the lots were for sale. The option was either to buy a lot in Tahiti beach and build a home, or to buy an already built home in the developed area of Islands of Cocoplum. They ended up buying a newly constructed home on Costanera Rd., and Mirtha Varas still resides there today, after her late husband Manny Sr. passed a few years ago. The fact that three generations of the Varas family are living in Islands of Cocoplum is groundbreaking and eye-opening. Manny, Brianna, and now little Angelo, represent a new breed of Cocoplum families that are creating a legacy in the community. Not only does it speak volumes about the desirable nature of a community such as Islands of Cocoplum, but it’s also indicative of the new trend of young families moving into the community. “One of the incredible things we’ve noticed in Cocoplum is that the neighborhood dynamics are changing. There’s a big second generational shift happening, and we’re seeing more and more families with small children,” explains Manny. Cocoplum, Islands of Cocoplum and Tahiti Beach are all seeing an influx of younger families, as well as a trend of multiple generations of the same family living in the community. “It’s funny but we have a friend who grew up here in Cocoplum. His parents still live here, and he loved the community so much that he recently bought his house in Los Pinos. We have another Cocoplum couple who are good friends of ours, and they just had a baby one week before Brianna,” recounts Manny. 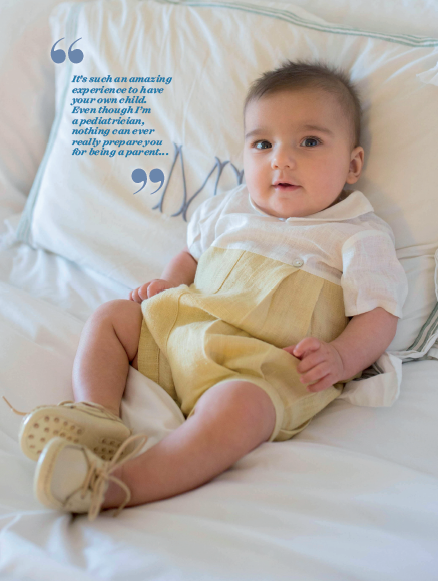